A number of my friends at Jubilee Farm have been asking about the table that my husband has been working on over this past year.  It is finished now. (Yes!) Here are some pictures as well as a story about the tree he used to make it and the metaphor that ties it all together.  It is very much about what we are doing together at the farm.  Thanks for taking an interest.

“The problem of sustainability is simple enough to state. It requires that the fertility cycle of birth, growth, maturity, death, and decay—what Albert Howard called “the Wheel of Life”—should turn continuously in place, so that the law of return is kept and nothing is wasted. For this to happen in the stewardship of humans, there must be a cultural cycle, in harmony with the fertility cycle, also continuously turning in place. The cultural cycle is an unending conversation between old people and young people, assuring the survival of local memory, which has, as long as it remains local, the greatest practical urgency and value. This is what is meant, and is all that is meant, by “sustainability.” The fertility cycle turns by the law of nature. The cultural cycle turns on affection.”

It All Turns on Affection  Wendell Berry 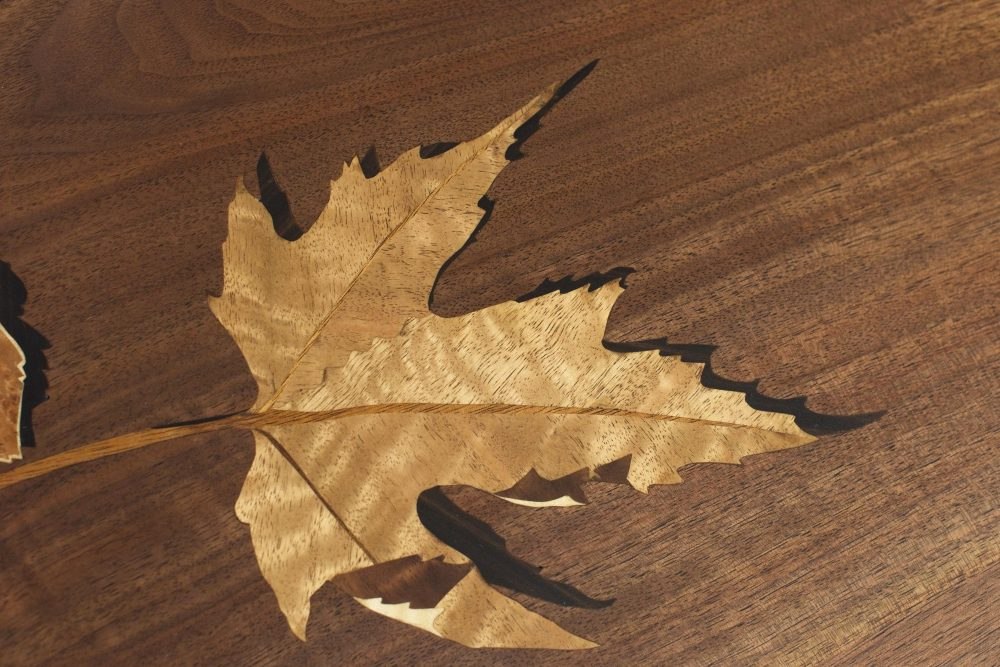 The Story of the Tree

Around 1825, the year in which the US Congress passed legislation clearing the way for the forced migration of Native Americans in the “Trail of Tears” or 1826, the July 4th that saw the simultaneous passing of Thomas Jefferson and John Adams, the American Black Walnut seedling that became the source for this table began its life in the “bottom woods” outside of Sullivan, Missouri.

Circa 1932, Earl Moneymaker, who lived with his family in Sullivan, harvested a number of black walnut trees out of those bottom woods, including the one in question which was about 107 years old at the time he cut it down.  The trees were cut into live edge slabs, stickered and air dried in the Sullivan shop.

The walnut lumber was used for special projects over the years in the Moneymaker and Sons Cabinet Shop.  Father Earl used some of that walnut to make a grandfather clock for each of his four children.  Young son Dave Moneymaker, born in 1926, gained proficiency on the lathe as a young boy, turning “hundreds of walnut spindles” for chairs, tables and beds.  In 1940, with the walnut slabs in tow, the family moved to Lenox, Iowa where the wood was stored and used lovingly and sparingly for the next 13 years before their migration west to Seattle where the family set up shop in the University District.  They made cabinets and furniture there for the next decade until they were forced to move the shop due to expansion of the University of Washington campus.  They loaded up their tools and the family walnut and moved across the lake to a new shop in the little town of Redmond (pop. 1,460) where son, Paul, built cabinets until his retirement in 1980.  While in Redmond, Dave followed his father’s lead and made a grandfather clock from the walnut slabs for each of his three children.

Upon Paul’s retirement they sold the building that housed the cabinet shop.  Needing a place for all of the family tools and the remaining walnut Dave, just recently retired from the Seattle School district, asked if I might be interested in expanding my shop as well as providing a place for the Moneymaker sons to pursue their woodworking passion in their retirement.  Terrie and I bought some land in Duvall and built a shop which became the home for the family walnut, the tools, many dating back to the 1920s, and “Dave’s Woodworking”.  We got a beloved grandpa in the mix.  Dave got busy carrying on the family tradition and used a good portion of the remaining walnut to make grandfather clocks for each his three grandchildren.

There were two planks remaining from the original bottom wood’s harvest of 1932 which Dave bequeathed to me before his passing in July of 2018.  Needless to say, a storied piece of wood such as this deserves a very special final home.

Dissociated from our roots and our sources, dispersed from our homelands, blown about by forces of war, economics and forced  or voluntary migrations our American internal diaspora has precipitated a host of social ills for which the antidote is a great homecoming.  A homecoming that recognizes the roots that give us sustenance, that connect us with the sources of our place, the circles of life and relationship that ground us with meaning and purpose.  The Greek root of diaspora is “to scatter” or in the case of leaves, to be blown about.  This table suggests and offers a prayer that the winds that scatter us can also blow so as to gather us back together  to a place of common root, common sustenance and common hope.

The metaphor begins in the base with the ancient tree of life and continues with successive approximations of increasing reality through the branches and roots, on to the multiple species of Northwes

t deciduous leaves represented by many colors and species of woods from around the world.

The gingko leaf, not indigenous to the Northwest, adds interest because it was indigenous to this region  five million years ago and was only reintroduced through surviving Chinese varieties.  We’re a nation of immigrants with deep and far reaching roots and finally, a common source.

maple seed pod is well represented making clear that we are part of a continuity of existence, grateful for the shoulders on which we stand but also clear in our responsibility to those who will follow us.  An “unending conversation” in the cultural cycle. “The branches are hope, the roots are memory.”  It’s significant that the life of the seedling that grew into this table marked its beginning during the year of the auspicious July 4th deaths of Thomas Jefferson and John Adams.  Both patriots, both holding the dialectic of rigorous political disagreement with one another along with mutual respect and admiration of the other.

The leaves blow in through the windows and scatter across the table with the first leaf  leading the way being the one closest to a person entering the room.  It is a branch from a huckleberry bush just

outside the door of my shop; a Northwest version of an olive branch extending a welcome to the newcomer to enter and take their place at the table.

The metaphor culminates, for the time being, with the circle of people gathered around the table enfleshing the hope of coming home.  My meditations while building this table kept returning to a quote that gives the metaphor of this piece a fullness of meaning.  Lewis suggests that the humans gathered around the table, sharing a common meal, are themselves metaphoric of a greater and ultimate reality.

“Our bodies receive life from God at a thousand removes—through our ancestors, through our food, through the elements.  The faint, far-off results of those energies which God’s creative rapture implanted in matter when He made the worlds are what we now call physical pleasures; and even thus filtered, they are too much for our present management.  What would it be to taste at the fountainhead that stream of which even these lower reaches prove so intoxicating?”